As a slower news day, I thought I would shamelessly post about one of my favorite RC niches, RC Rally Cars!  There has been a welcome boom in the number of RC Rally cars on the market in the last few months. Most of these are in the larger and more capable category of Short Course Truck based cars as opposed to the more scale 1:10 vehicles which are touring car sized, although the latest offering from Kyosho is 1:10, but only an update of an older model.

I had been becoming a little disheartened with my XV-01 if i”m honest.  I’d had little time behind the wheel, and on the times I had been driving, the terrain was just too large for the vehicle, meaning it wasn’t as fun as it could have been.  I had started looking at the larger vehicles as a replacement that could handle a broader variety of surfaces. Then my local club had a family BBQ / practice day at the track.  It had been wet and the road outside was wet, muddy and about the right scale of surface.  It was  just begging for some rally action!

The result, I had a blast, as on the right surface the XV-01 platform really is hard to beat for fun and scale handling. But it did get me thinking, the different scales of RC Rally cars from the Losi 1:5 Rally Mini down to the 1:16 Traxxas rally can be a surprising distance apart in size, so I thought i’d post some photos and videos that I new would highlight the different sizes clearly!

So what sizes are there?  I’ve categorised them into a few groups below for reference. I have not included the micro cars that have limited off road ability, but have included some recently available models. Personally I love the 1:10 / Scale size cars for their realistic scale appearance.

As a useful visual guide, here is a great video from Jang over at Ultimate RC comparing the size some of the above vehicles side by side.

And this video talking about the capabilities of each, and which he would choose.  You can find individual reviews of each from Jang as well.

And this great photo from the rally section of the RC Crawler forums showing from Left to Right, DRX, WR8, XV01, XV01, Atomik, DRX.

It seems that so many things seem to have started with bicycles, Look at the wright brothers, who started out working on bikes, and so the story of Bezerk RC also starts with bikes.

Paul Sims has been fabricating most of his life, from cars, and motorbikes through to working for his fathers business, Greenspeed, an Australian manufacturer of recumbent bicycles (laying back rather than sitting on top).  Paul worked at Greenspeed for some time from fabrication, to R&D, production, outsourcing and whatever was needed. Just like any family business, he still finds himself working there most days fabricating for the business, as well as his own company, Bezerk Cycles, that has been operating for some time, mostly generating work from word of mouth.

2009 saw a friend give his son a promotional RC truck which reignited an interest in the hobby for Paul who had always wanted one himself, and so Paul ended up at Knox Off Road where he still races today, in fact he tells me that he currently holds the title of the club President, so he isn’t leaving any time soon.   Naturally Paul’s mind ventured int fabricating hand made parts for these cars, from electric conversions to custom parts and mid mount conversions for buggies and trucks.

Initially borrowing a friend’s mill to fabricate parts occasionally, a friend who raced with Paul at the BRCCC suggested that he “start a facebook page”, and suddenly a global market for Bezerk RC appeared and as the number of inquiries from around the world increased it suddenly appeared that it could be a viable business by itself. So that dreaded trip to the bank manager was made, funds procured and Paul set about making his own Mill.  Yes, not one to take the easy way, Paul scratch built his own CNC Mill. It took a few weeks, what I expect was an incredibly steep learning curve for new software and equipment, and Paul was up and running with his own equipment.

Paul told me that, The supply of carbon was always the hardest to find. My current supplier is providing material that many customers and reviewers have had nothing but good things to say about.  Bezerk parts have gone to most places around the world, the Internet of course makes that happen. He prototypes for other peoples companies and outsource work if required.

Custom work has always been the focus of the work at Bezerk, whether it be replacing a hard, or impossible to find part, to parts with minor changes to suit a users needs, right up to completely custom parts and chassis.  Making a dream into reality as Paul puts it.  Requests come in every form from fully fledged cad drawings to sketches on pieces of paper.

From your regular club driver or basher to drivers of other teams, the list of Bezerk customers, and parts, is growing daily. Parts start from around $10 for a pair of BD7 battery hooks for example up to $90 for any onroad chassis. Looking through not only the price list on the facebook page, but the photos and information about projects that Paul has undertaken is certainly a glowing reference of his fabrication skills and the imagination of his customers.

To find out more about Bezerk RC, or to have a look at the work that they have done, check out their facebook page at https://www.facebook.com/BezerkRc and tell them Aussie RC sent you 😉

I enjoy painting a RC car body, but i’m certainly no pro, and I have a lot of love for the places that sell some fantastic skins for common RC car bodies.  Today reading Big Squid RC I was introduced to another, freqeskinz.com.  I have to say they have some impressive looking skins that I am LOVING the look of such as the one below. 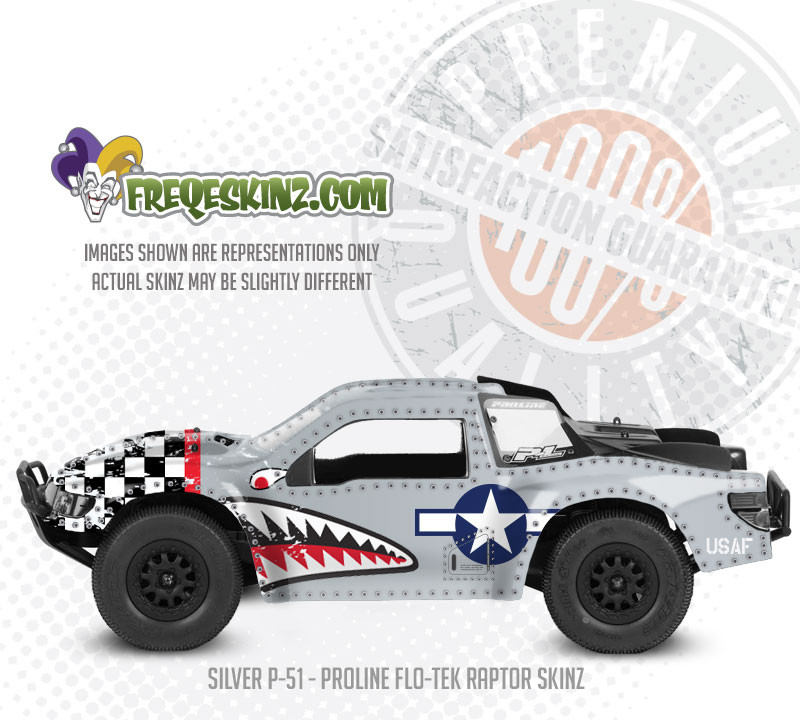 Check them out at http://www.freqeskinz.com/

My other favorite place for RC Car Skins is Upgrade RC http://www.upgrade-rc.com/ who have a lot of skins for a lot of race cars, as well as some fabulous customisable designs.  In all fairness, I have known of Upgrade RC for far longer, but I’ve never gotten around to purchasing any of their products I am afraid to say, I should change that one day for at least one of these companies!  Upgrade RC actually sell a lot more than vehicle skins, so their website is always worth a close look.

The big news, or lack of, from when I was on holidays was the release of Team Associated successor to it’s popular and successful B44.2 .

I know a lot of people had hoped for an all new buggy, but what showed up in everybody’s inbox was an evolution of the B44 platform rather than an all new design. So what is new in the B44.3?

The official line of what is new includes:

Enter the RC10B44.3 Factory Team Kit, the latest evolution of Team Associated’s 1:10 4WD electric off road competition buggy. The most significant changes are found on the new hard-anodized aluminum chassis, which helps lower the center of gravity to improve handling and durability. The chassis has been designed to have symmetrical torsional flex to improve handling consistency — the new floating motor mount, floating servo mount, and chassis machining help to provide the desired flex symmetry.

Power and traction have continued to improve, so the B44.3’s drivetrain has been built up and refined to keep up with the demand of today’s high-traction off-road tracks. A set of four precision CVA’s transfer the power from the gear differentials via ball bearings throughout the car.

Now the B44.3 is even more adaptable to multiple racing conditions with the adjustable weight bias feature. Weight bias can be significantly altered by using either the front motor configuration with a saddle pack or the rear motor configuration with a shorty pack. The B44.3 is also backwards compatible with the previous generation VTS slipper clutch (not included) and ball differentials (not included), making the B44.3 extremely versatile and adaptable to any track condition.

The RC10B44.3 has been given all of the design advantages that only a winning pedigree like Team Associated can provide. If you are ready to take your 1:10 4WD off-road program up to the next level, the B44.3 is ready to take you there!

The short list, a new Alloy Chassis, A new servo and motor mount, a JConcepts Finisher body, new shocks, new diffs.  All important upgrades to the platform, but a few may be disappointed.  I’m not for a second suggesting that minor upgrades to what has been a very successful platform is a bad thing as far as a racing buggy is concerned, but I guess I had hoped or a fresher new platform.

more details can be found at http://www.teamassociated.com/news/latest_products/1427-NEW_B443_Factory_Team_Kit

I was thinking that I missed this new Lexus Coupe while I was on holidays, but then it was only posted on their facebook page a couple of hours ago!  The Scion a few days ago though. The Lexus RC F and Scion Racing FR-S GReddy cars are the latest additions to Team Associated Qualifier series of cars.

Neither car is a Racing Touring car, nor dedicated Drifting vehicle, so Basher / Adventure driver I suppose is the most accurate categorisation for these vehicles, but they both look great., especially the Scion Racing FR-S Rocket Bunny replica body

I definitely missed this post by RC Insider when I was on holidays, photos under the hood of a prototype being driven by Ty Tessmann!

The original post is here http://rcinsider.com/?p=62728 and a few have postulated about 2wd cars he had been driving for a while, this is the first confirmation I have seen that it is a prototype of anything that may reach production.  See the original post for more details and photos.

I was going to post it later today, but I loved it so much I had to post it now.  Not applicable to every class or every track, but some good rules to live by at the local track! The guys over at Team Novak are always a helpful bunch, and the other day released a helpful guide showing their recomendations for ESC and Motor combinations for the Axial Racing lineup of vehicles.

If you are in the market for a new system for your Axial rig it is certainly worth checking out at  http://teamnovak.com/file_download/1405096973Novak_System_Recommendations_Axial_%28web%29.pdf

I’ve been on holidays for the past 2 and a bit weeks which is why we have been a little quiet here, and certainly there has been some news in that time which I will endeavor to catch up on through the next day or so so have patience with me.

Remember as always, any news, tips, events or so on, send it to us at aussierc@outlook.com

As was somewhat expected, the 22 SCT 2.0 has finally been released as the 22 Buggy had already been updated to the 2.0 standard. To quote TLR themselves:

The 22SCT™ 2.0 Short Course Truck Race Kit is the next step in the evolution of the championship-winning 22™ platform. Its uses front suspension advances adapted from the 22 2.0 buggy and all new rear suspension geometry to give drivers of all skill levels a short course truck that’s easy to drive fast. Other changes include a new bell-crank steering system, Gen II shocks with X-ring seals and a completely updated ball differential with tungsten carbide diff balls. The kit also includes popular option parts and an all-new, more durable body.

However rather than me prattle on about it, hear it from those that know, here is a video from Amain Hobbies of  TLR’s Frank Root & Ryan Maifield discussing the 22 STC 2.0

For the full details visit http://www.tlracing.com/Products/Default.aspx?ProdID=TLR03003