If you have a crawler, you will know EXACTLY who RC4WD are as they make some of the best products and accessories available for Rock Crawling vehicles in the world.  If you didn’t know that before, you do now.

Some of their latest products are very tasty, as a Land Rover man I am loving their new Defender 90 Pickup Truck body.  Now the normal hard top has been available for some time as a body as well as on the RC4WD Gelande 2 kit, but the truck cab variant always looks fantastic and lends itself to modification as a longer bed 110, cab chassis or range of other variants when it comes to modifications.  Information about this new hard body is here http://store.rc4wd.com/110-Land-Rover-Defender-D90-Pick-Up-Truck-Hard-Plastic-Body-Kit_p_4180.html 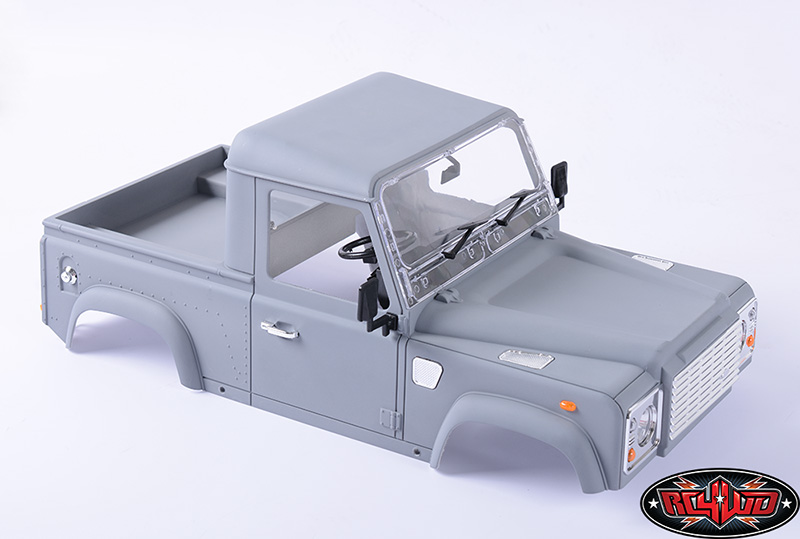 Next is almost as exciting in many ways, a scale V8 Engine and transmission! You can put a standard crawler brushed motor in the V8 and the transmission is a single speed, working transmission, the combination of which looks amazing!

There is a lot of excellent products coming out of the woodwork today, and surprisingly not related to the current IFMAR Worlds.

Viper R/C Solutions is proud to introduce authentic epic1Designs Chassis Armor with the Viper R/C logo.  This high quality Chassis Armor provides 21mil thick protection and will reduce friction from contact chassis has with track. With peel and stick, and stick, and stick technology, the Chassis Armor can be removed to work on your car and re-applied multiple times with no issues.  Peel it off, fix your car, stick it back and you are ready to go multiple times.  The 5.5 in by 13.5 in sheet will fit 1/10 touring cars, offroad trucks, offroad buggies and many 1/8 vehicles.  Keep your chassis protected with armor, and show off the Viper logo at the same time!

I have to say I like the look of these, they would be good on my Buggy and my rally car!

Speed runs aren’t something that is in my blood.  I’ll do a un ion the street to see a car maxed out, but that is about it.  For others there is a little more passion there.  The HPI Broza is no slacker when it comes to speed, but the boys at Vorza Aussierc (who can be found on facebook here https://www.facebook.com/AussieRC?fref=ts ) like to go a little faster.  How much faster?  Is 196 km/h fast enough for you?  See their speed run below.

It’s not the only fast car they have, but I have to say those numbers are pretty impressive, and i’ve never heard a Vorza sound like THAT!  Want to see more?  Check out their youtube channel here https://www.youtube.com/channel/UCfNBnInxKm8dSxH_XPnTJiA

All I can say is I would have enjoyed High School so much more if we had a Remote Control Car Club, and that is exactly what Lucas Heights Community School has!

Best of luck to them with it, and I hope it continues to get young people interested in our hobby.

Famous name and a famous haircut, Robert Reed (Reedy) joins the Proline Australia EP Offroad Team. With a career best performance at the NSW States last week, we couldn’t help but have him on our team!! Check him out whipping it at RC Arena Tonight!!!

I’ve seen some interesting comments and thoughts from some of the top drivers at the 2014 Nitro Off Road Worlds in Sicily overnight so I thought I would post a few snippets of what they had to say.

Practice is finally over! Quals start tomorrow. Plenty of controversy here regarding rules and running of the event. Double coming before the straight will continue to produce lots of controversy this week. I’m doing ok. Having lots of brake issues. Seems having proper brake setup is most important thing for this track. Few clear front runners so far. Biggest thing they have is ability to clear left double consistently and land on inside. Hoping it all comes together for me tomorrow. 10 minute runs vs timed 3 laps should help out. Hopefully the concrete holds up all week.

After controlled practice we are second!! Really happy with our performance, we got a good setup to start qualyfing tomorrow morning so we will try to make clean heats!
Also great talk with Jared Tebo before the ceremony and nice Wc’s Team photo!!

The first couple practices went well yesterday and we are getting the car dialed in, about to leave to the track for day two of practice. I’ll try to post more, wifi is hard to come by here.

Day two of practice is over, everything is going well, relaxing with some gelato after dinner with Tim, Daniel and Torrance.
My car with the new Proline lexan wing.

I don’t think Jared is a fan of the surface.

The glued dirt is only 1/4 inch thick on top, concrete is starting to show everywhere

Anyone need their bathroom tile updated?

Reno seems happy that his pace is improving, see more at https://www.facebook.com/rsavoya?fref=nf

This month’s Racing Lines is a good one I have to say, although a slightly different physical print than the last editions.

In between the covers you will find articles on LRP at the ETS season final, an interview with Shane Van Gisbergen of V8 Supercars and RC racing fame, a look back at some cars of the past from AYK, a look at the Latrax V8 Supercar, a review of the Team Associated RC10 1993 Worlds Car re release and of course the reports from the latest major Australian RC races around the country.

One article that caught my attention was Scott Guyatt’s article titled Get a Grip. It’s well worth a read and it examines the latest fad of high traction surfaces such as sugared off road tracks that simply eat tyres.  Whilst I don’t often have the opportunity to race on dirt I have to agree that I don’t think high traction, heavily prepared surfaces are the best thing for the RC Racing Scene on the whole.  Now I have to confess, my regular racing haunt is a high traction carpet surface, not because we were looking for high traction, but because the concrete in the shed we race on is too slippery to race anything.  Also the carpet can be removed when the site owners need the venue for other events.  I never thought I would hear myself saying that I have too much grip at any RC track, but it was a phrase I have used on many an occasion now that the track is almost 100% carpet.    Have a read of Scott’s article, and let us know what you think, but personally, I 100% agree that at a local level, it’s not good for the hobby I love.

Come Drive With Us is a series of documentaries on major RC races created by 5150 Media Productions. This particular video deals with what was the last outdoor Cactus Classic race in Arizona earlier this year.  There is some fantastic footage as well as some interesting insights into a few issues such as the sugared track and the move to indoor for next year’s edition of the Cactus Classic.  It’s worth a look if you can slot away the 25 minutes to spare, so without further ado, enjoy!

I didn’t miss this the other day, I just wasn’t motivated enough to do any posting that day, sorry!

Mugen Seiki is proud to introduce the release of the MBX7R 1/8 Nitro Buggy! The MBX7R kit is based off the World Champion MBX7 platform with many high end improvements in suspension, steering and other areas to create the ultimate 1/8 nitro off road buggy.

Mugen concentrated on the making the suspension on the MBX7R even better with new 16mm bodied front and rear racing shocks. These new shocks will improve stability in both bumps and jumps greatly. The bigger bodies’ shocks will make the 7R have less fade during longer runs which means you can drive even harder than ever before. The rear shocks are 4mm shorter and with the use of a new rear shock tower will keep the back of the 7R hooked up and on the ground. The 7R gets a chassis change with the side angle of the chassis changed which creates more strength and a better feeling on all racing surfaces.

The MBX7R gets a re-designed front hub carrier in which the position of the front axle has been changed to a trailing axle position. This will improve overall steering and feeling of the 7R. A new steering ackerman plate with additional steering tie rod holes to have maximum steering adjustability. The front upper suspension arm has been shorten 1.6mm to allow for more camber adjustability and the use of the E0161 spacer between the pillar ball and upper arm.

The drive train of the MBX7R has been changed and improved with the use of a new universal style drive shaft for both the front and rear drive shafts. This will greatly improve the feel of the buggy on bumpy surfaces. The use of the universal will make the overall drive train much smoother and will spin with less friction. New wings mount which will allow the wing to be moved closer to the shock tower to allow for better traction and jumping abilities. The fuel tank gets a re-designed baffle system to increase fuel pick up and to keep the fuel clunk positioned correctly.

Sworkz have been teasing about a truggy for a while, but today marked the official release of details on the kit, and all in all it looks like a good package. It iwll be interesting to see what it can do in the hands of their drivers.