Kyosho is re releasing the HONDA NSR for 2014 for those who love their RC bikes!  The documents refer to two bikes, although I could only see one model or colour scheme, but as it is Mick Doohan what more do you need! 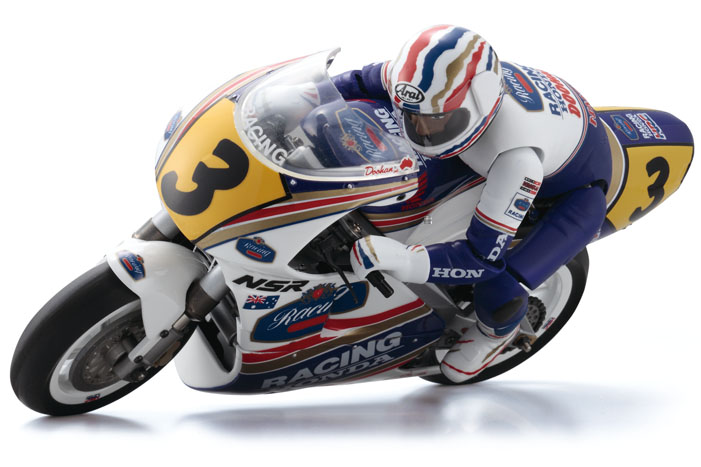 THE MOST REALISTIC SCALE MOTORBIKES ON THE TRACK!

The ultimate in scale realism! These two bikes not only lean realistically through the curves, but the rider moves from side to side at the same time! These two models are moulded for even greater scale accuracy and easier access to radio equipment and mechanical parts. The rider is made from an astounding twenty separate parts for natural movement! Fully functional suspension using sprung front forks and a sprung monoshock swing arm at the rear ensure efficient road holding. Oil filled sprung dampers can be fitted as optional uprate parts for even better handling on rougher tracks. The powerful Kyosho Le Mans DM20 motor (included) drives the rear wheel via a real chain system. (Optional ballraced motors can also be fitted for even better performance). Each kit includes two gear ratios, allowing you to match the power to the track. A comprehensive sponsor decal sheet is included for both the rider figure and the bike itself, allowing you to create a scale masterpiece that really works! Great looks and fun to drive too!